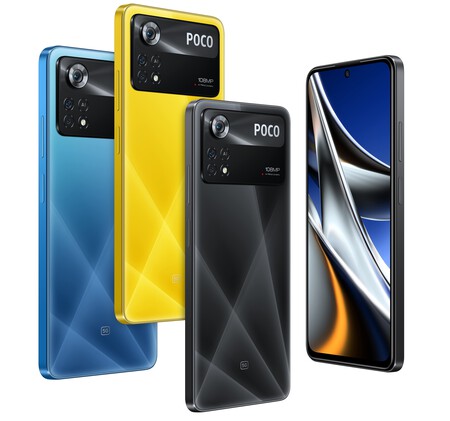 In 2021,Xiaomi‘s Poco X3 Pro became one of the most popular smartphones in the market due to its excellent value for money. In February 2022, the brand renewed the model by launching the POCO X4 Pro 5G. Therefore, many users are wondering if it is worth buying this new device and above all, what makes it different from its predecessor.

If you want to know how much these devices change to decide which one to buy, we tell you in detail its main features.

The visual aspect is always an important point when it comes to comparing smartphones. The Poco X4 Pro really represents a major evolution in terms of design. Its back panel, for example, is totally different from that of the Poco X3 Pro.

It does not have the brand’s logo at the bottom, but is included in a more disguised way in the camera module. This also has a different design, as it is no longer in the center, with a round marking. It is now rectangular and occupies the entire top of the phone.

Regarding the display, both devices have a 6.67-inch diagonal screen, with FullHD+ resolution of 2400 x 1080 pixels and a frequency rate of 120 Hz to ensure a smooth viewing experience. In addition, they support HDR10 content, so both displays can reproduce vivid and intense colors.

It is time to review the interior of these devices, specifically their processor. Both devices have Qualcomm processors, but from different series. The Poco X4 Pro incorporates the Snapdragon 695 5G, which is one of the newest of the brand. It features 6 nanometer manufacturing, eight cores and an Adreno 619 GPU.

The Poco X3 Pro, meanwhile, carries the Snapdragon 860 inside, which at the time was one of Qualcomm’s most powerful chipsets. In fact, three years ago, this processor was only found in high-end phones. Its construction is 7 nanometers, also eight-core, but with Adreno 640 GPU, which is why this device has better performance than the X4 Pro 5G.

In the photographic section we also find differences between the two devices. The camera configuration of the Xiaomi Poco X4 Pro 5G is triple. Its main sensor is 108 MP with f/1.9 aperture, while the other two are an 8 MP wide-angle, with f/2.2, and a 2 MP macro sensor with f/2.4. It is capable of recording video in Full HD 1080p resolution.

There are also notable differences in the front camera. While that of the new model is 16 MP with f/2.5 aperture, its predecessor has a 20 MP one, with f/2.2.

Battery and other key features

Another aspect worth comparing is the battery. The Poco X4 Pro 5G’s is slightly smaller, being 5,000 mAh, while the Poco X3 Pro’s is 5,160 mAh. However, the former’s fast charging is 67W and the latter’s is a mere 33W. Therefore, the new model is considered more advanced in this section. Both devices feature USB Type-C.

As for the other technical specifications, there are not many differences between the two devices. Both have stereo speakers, infrared and fingerprint sensors, Wi-Fi 802.11 a/b/g/n/ac, NFC, GPS with A-GPS, Bluetooth (v5.1 in X4 Pro and v5.0 in X3 Pro) and IP53 protection (splashproof).

However, it is worth noting that only the Poco X4 Pro has 5G connectivity. So if you want to enjoy the new connection speed, the Poco X3 Pro is not an option.

What is the best alternative?

It really depends on your budget and needs. The Poco X4 Pro, being a newer device, has a higher price than the Poco X3 Pro, although it is likely that over the months its cost will be lower. There is also the option of buying it with an operator, although this case will have network restrictions. If so, do not worry, remember that in Movical you can unlock your device easily and quickly.

As for the features of both terminals, in general terms the Poco X4 Pro may be a better option. Its screen has a more advanced technology, although its protection is less. It is also superior in terms of the photographic section, since the main sensor of the Poco X3 Pro falls short. Of course, the video resolution of this one is much better.

The performance of last year’s model may be superior to the new one. This is something you will notice, especially if you use your device for gaming. In any case, we recommend you evaluate the use you will give to the cell phone to make a choice that really suits you.